Next in ToC: Making Maki at Home 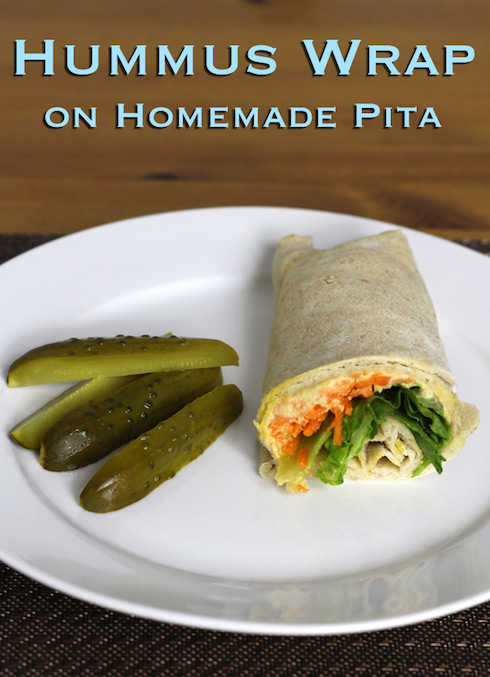 I work in a hospital during the week and I (very) occasionally have to avail myself of the trucked-in hospital meals. (Imagine the coldest, rubberiest fries you've ever thrown away, paradoxically inhabiting a piping hot steam table and you'll be in the right mental ballpark.) The one thing in this factory-supplied, mini-cafe nightmare that I can count on for flavour, freshness and even nutrition is a pita wrap with hummus, romaine lettuce and shredded carrot. Inexplicably, the pita is always soft and fresh, the hummus tastes homemade and the raw veggies are crisp and abundant. The only possible explanation I can come up with is that all of my fellow customers have also sussed out the unique edibility of this wrap and are keeping the inventory moving fast enough to ensure consistent freshness.

Rather than tempt fate by becoming dependent on this pita-wrapped oasis in the desert of institutionally outsourced "food," I decided to try to duplicate it at home. Last week, I bought one, took it apart and reverse-engineered it. The pita started out being about 12 inches in diameter. They spread hummus in a 3" strip down the middle, scattered the carrot shreds liberally over the hummus and then added 2" chunks of romaine on top of that. They then tucked up the two ends of the pita nearest to the hummus strip and folded one of the far edges over the middle of the fillings. From there, it was just a matter of rolling from the middle to make a complete wrap and then cutting it in half. Eating the dissected wrap was only slightly less pleasurable than a fully intact one and I had the info I needed to go to work on my own version at home.

4 pitas, 12" diameter, homemade or store bought. If you want to make your own (they're a whole lot tastier) I have a pita recipe here.

About 1 1/2 cups of hummus. Again, the homemade option is my preference and you'll find my hummus recipe here.

Shred the carrots using a mandoline.

Lay out the pita on a large flat surface.

And rip the romaine into 2" chunks (roughly salad size pieces) and distribute on top of the carrot.

Using the two end fingers of both hands, hold the wide ends of the pita in, while folding the closest edge over itself. You want that closest edge to cover over the fillings while the ends of the wrap stay tucked in.

Then, tightly roll the wrap with both hands until the rest of the pita has been used. Be gentle to avoid tearing the pita (not the easiest thing in the world if the wrap is homemade and fresh—it may help to microwave the pita for 20 seconds or so before using it.)

Cut the wrap in half.

Repeat for the remaining three pitas. I find half a wrap is just enough for lunch with other cut veggies and fruit.