Next in ToC: Simple, Tasty, Vegan Spanish Rice for Burritos 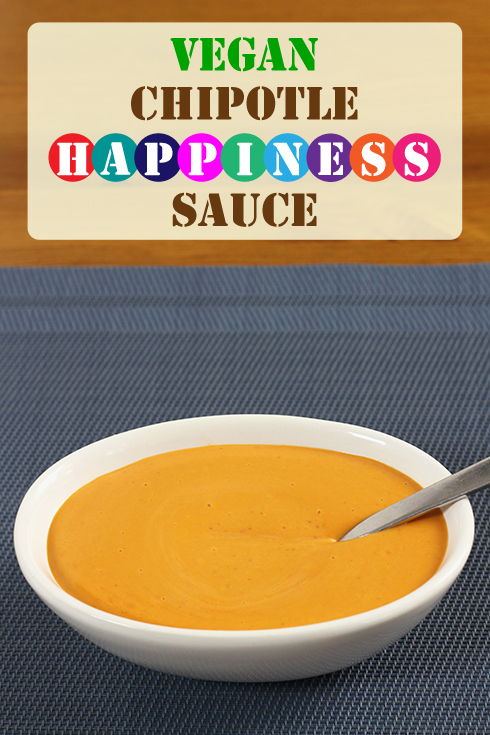 I love vegan burritos, and naturally I want to be able to make them at home. But for a homemade burrito to be satisfying, it has to have some kind of spicy sauce that really clings to the other ingredients. Think mayo or sour cream, but obviously vegan and obviously much hotter, preferably with the smoky beauty of chipotle. (Note that this recipe is part of a series aimed at making a delicious vegan burrito from scratch.)

I decided to start researching vegan mayo recipes since they theoretically have the right consistency, but I couldn't resist playing with the flavours. I was expecting some disasters because I didn't know how much playing I could do before it refused to turn into a mayo-like sauce. (I guess spicy oil isn't exactly a disaster, but I wasn't going to be satisfied unless the result was a little thicker than maple syrup and very smooth.) Inspiration came first from this straight-ahead vegan mayo recipe from Oh She Glows, but I obviously wanted different spices. (I also opted for the food processor instead of the immersion blender and it worked just fine.) I also got some ideas from this chipotle aioli recipe from My California Roots. It was good, but I wanted more heat and more tang. In the end I used a combination of the two recipes for the desired effect. I also tried a tahini-based sauce that didn't make me happy because it tasted a bit too much like chipotle flavoured tahini. But I did see some interesting recipes based on tofu that I might try in the future.

I've given this sauce a good tryout on massive vegan burritos (recipe coming soon!) and it fits the bill perfectly. I've also got a craving for a vegan breakfast sandwich with a tofu-onion frittata served on a fresh biscuit and topped with this sauce. Stay tuned!

Update 7-Sep-16 Garlic-in-oil risks: Because this recipe has both garlic and oil, I need to talk about the risk of botulism contamination. Garlic grows in the ground, opening the possibility of contamination with botulism spores. An oil immersion is an anerobic environment that may encourage botulism to develop. The link above goes into a lot more detail with references, so you can get more information there. They make a few recommendations, including refrigeration, discarding any unused leftovers within a week, and the addition of an acidifying agent (such as the lemon juice that we're using here) at a rate of 1 Tbl per cup of oil.

1/4 cup aquafaba (liquid from can of chickpeas)

2 Tbl lemon juice (don't leave this out, see note above about safety)

Process the contents of the food processor roughly—it doesn't need to be totally smooth because it will get that way when you slowly add the oil.

Turn the processor on and don't turn it off again until finished. Add a small amount of the canola oil (no more than a Tbl or two) in a thin stream and wait for it to be incorporated into the mixture. It may take 10-15 seconds. You should notice the mixture getting lighter in colour and it should stay thick. (If it thins out, it means you're adding the oil too quickly.)

The final consistency is about the same as ketchup, but the flavour is smoky, hot, tangy deliciousness.

Keep sauce refrigerated and discard any unused portion after a week.

This recipe makes a little more than a cup and you will definitely find all kinds of things to spread it on. Ok, mostly sandwiches (and tacos and burritos), but it will perk them up in ways that other condiments never could. Enjoy!