Next in ToC: Making Panini for Vegans 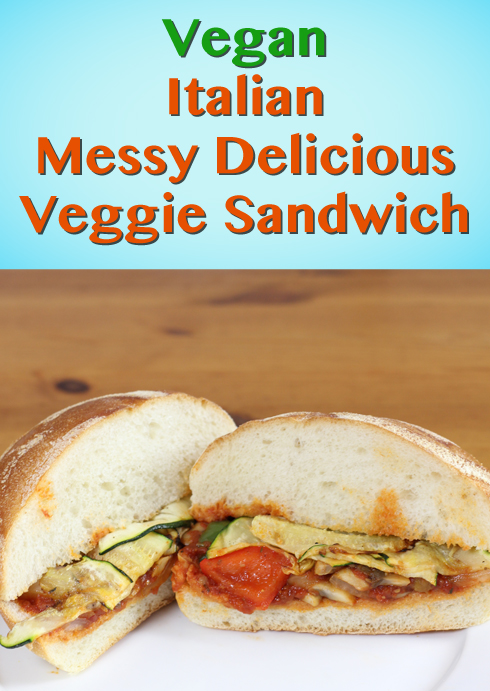 One of the local Italian sandwich shops does a vegan version of their typical breaded meat on a kaiser with cheese and tomato sauce. I ordered it because someone had suggested this place for a catered lunch at work, and I was blown away. As I devoured it, I was of course also analyzing it to try to duplicate it at home. Analyzing and devouring are difficult to do at the same time, but there were a few things that stood out for me. First, the kaiser rolls were same-day fresh. Big and soft, yet chewy and substantial. This was a very promising start. Next, the tomato sauce was obviously top-notch. Again, totally fresh-tasting, thick and sweet. Finally, the veggies were crisp and somehow kept their individuality through cooking. I was expecting limp roasted red peppers, but they surprised me with gently sauteed fresh peppers. Really, really good. That was all the motivation I needed to give it a try at home. Here's what I came up with. The filling in this recipe is enough for 2-3 good-sized kaiser sandwiches. Leftover filling is really tasty on toast.

This is another one of those recipes where you want to have the veggie prep done before you start cooking because everything comes together a little quickly once the cooking starts. Grill the zucchini separately as the last step, while everything else simmers in the frying pan.

I used to hate working with sweet peppers because they're so finnicky to cut up and seeds get everywhere. Here's a little trick that I learned from a Gordon Ramsay video.

First, trim the stem off and set the pepper on its head on the cutting board.

Hold the pepper still while carefully slicing down one of its 3 or 4 lobes. (No, it's not Michael Jackson appreciation day—I broke down and brought a cut resistant glove because I've been tempting fate lately with the amount of chopping I've been doing. Gives me a little peace of mind.)

Notice that the seeds stay put on the inside and you get just the flesh.

Chop the pepper into one-inch chunks. You want them a little on the big side so they keep their integrity and stay sweet and juicy in the frying pan.

Get the other veggies ready to go.

For the zucchini, I like thin, lengthwise slices for grilling, so I use a mandoline. However you do it, you ideally want slices 4" long or so, cut fairly thin.

Heat a deep skillet over medium-high heat. Just before you add the mushrooms, light the BBQ and set it on the lowest heat setting.

Add 2 Tbl canola oil to the frying pan, then saute the mushrooms for about 5 minutes by themselves. (I like to give the mushrooms a headstart because they release a fair bit of moisture and I don't want to make the other veggies soggy.)

Add the peppers and onions to the frying pan and saute for about 5 minutes. There should be lots of sizzling—we want everything cooked but still crisp.

Reduce heat to medium and add tomato sauce. Stir frequently and wait a couple of minutes for the sauce to heat up, then reduce to a simmer to give you time to grill the zucchini. Adjust salt and pepper.

Assemble the sandwiches laying on the filling generously. Serve with extra napkins.

Some Suggestions for Homemade Tomato Sauce

Whether you want to make your own tomato sauce or just get a jar from the store is a judgment call. Ordinarily I'd opt for the jar, but for this sandwich, I wanted all of the ingredients to scream freshness so I chose to experiment with making it from scratch. I made the sauce the day before I wanted to serve the sandwiches.

As always, the internet is loaded with delicious-looking recipes. I decided to veganize an especially well written tomato sauce recipe from Serious Eats. I also cut it in half to avoid having way too much tomato sauce for my needs. I really recommend working from the original recipe because the writer goes into a lot of detail about the thinking behind his choices. I'll just describe here what I did, emphasizing where I deviated from the recipe.

I decided to use the slowcooker instead of the oven to reduce the sauce because it's a million degrees outside in Toronto this week and the last thing I want to do is have the oven on for six hours. The resulting sauce was sweet and delicious, with just a hint of heat thanks to the red chili flakes. (When the weather is cooler I definitely will try the oven method because I'm curious about whether it really results in a richer, sweeter, more nuanced sauce.)

It's really a very easy recipe. I used 2 cans of the recommended San Marzano whole, peeled Italian tomatoes. Make sure the can is marked D.O.P. as shown.

After emptying the contents of the cans into a large bowl, you get in there with your hands and squish the tomatoes into small pieces, no bigger than about 1/2 inch.

I reserved 1 cup of this tomato mixture in the fridge to add back at the very end to balance out the sweetness of the cooked sauce with a little bit of sour.

I substituted 1 Tbl refined coconut oil for the butter in the original recipe.

I heated up 2 Tbl olive oil along with the 1 Tbl coconut oil over medium heat and cooked 4 minced cloves of garlic for about 2 minutes, stirring often.

And cooked for another minute.

Then I added the tomato sauce, along with 1 carrot cut into chunks, half an onion (not chopped), and 1 medium stem of fresh basil.

After about 10 minutes of frequent stirring, everything was the same temperature and I poured the mixture into the slowcooker.

At the end, I fished out the carrot, onion and basil, then seasoned with salt and fresh ground pepper. I got just a little less than 4 cups of delicious chunky sauce for my trouble (which really wasn't all that much—the slowcooker did most of the work).