Next in ToC: Chipotle Refried Black Beans from Scratch 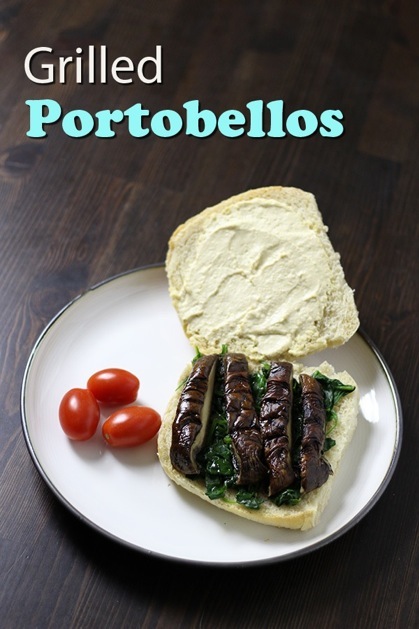 We all know that grilled portobello mushrooms are great in a sandwich. That's why I wasn't too upset when the portobello panini was literally the only vegetarian option at a friend's favourite pub. With the first bite, it was clear that I would be having a great meal. I know this is going to sound strange, but what put this sandwich over the top was a bed of wilted spinach. It just worked. But even as I was thorougly enjoying it, I was naturally thinking about how I would change it. The pub version came with a tomato tapenade, which I had served on the side because I'm not a fan of sweet sandwich toppings. (Turned out to be a good call—the stuff was sweeter than ketchup.) I was wondering whether some nice garlicky hummus wouldn't be a better choice, particularly if dripping with olive oil.

The next day, I got down to the business of recreating this beauty at home. I picked up six massive portobellos from the local produce shop along with the other ingredients. Because the mushrooms can be a little thick and firm, I wanted to get soft sandwich buns (think kaiser) as opposed to the crusty ciabatta bun I had at the pub. It had been a little while since I had marinated mushrooms, so I had forgotten how much flavour you get for such a small amount of work. I let them sit in olive oil with a little bit of tamari sauce and balsamic vinegar for a couple of hours, shaking up the container three or four times over that period. Ten or fifteen minutes on a medium grill and WOW—juicy and beautiful with thick flesh and just a little tang from the vinegar. The mushrooms, spinach and hummus all work together to make a rich yet nutritious meal that fills you up without weighing you down. I could easily have these sandwiches once a week and never get tired of them.

hummus for spreading, mixed with additional olive oil if desired

Mix the olive oil, tamari sauce and balsamic vinegar well, then pour into a large plastic container with a lid. Add the mushrooms, mix well, and cover for 1-2 hours to marinate. Every half hour or so, shake up the container to make sure the marinade continues to coat everything.

Heat a deep skillet on medium heat and add the spinach. Stir frequently until the spinach has wilted down. Remove from heat and transfer to a dish.

Heat the BBQ up to the medium setting for about 10 minutes. Grill the mushrooms for 10-15 minutes, turning frequently.

Build the sandwich with a layer of spinach on the bottom, a layer of hummus on top and the mushrooms in the middle. Enjoy immediately.