Previous in ToC: Nothing Beats Bagels Fresh from the Oven

Next in ToC: Make this Rich Focaccia with Vegan Parmesan and Olive Oil 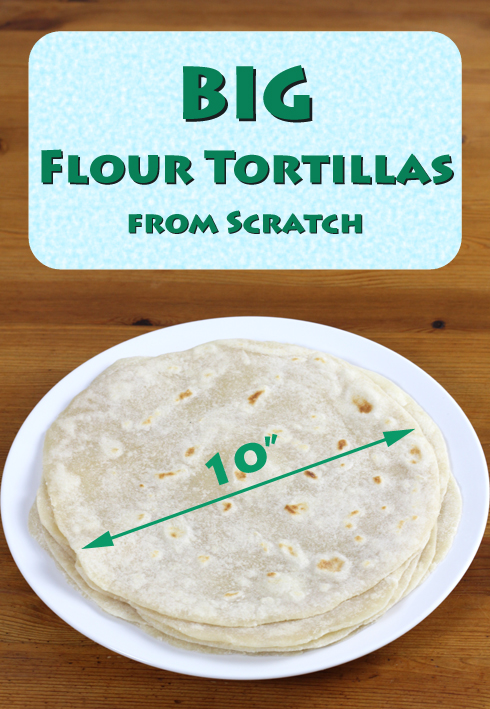 My experiences with store-bought tortillas made from corn have been pretty positive for the most part, probably because I get them very close to where they're made. Not so for flour tortillas. I can't say that I've gotten a big hit of enjoyment from any package of flour tortillas that I've bought at a store. There's something faintly acrid about the flavour and something about the texture that screams "factory." So, I've been wanting to learn how to make flour tortillas from scratch for quite some time. (Note that this recipe is part of a series aimed at making a delicious vegan burrito from scratch.)

As with most internet searches, you'll find some variability in the different recipes out there. Some use baking powder, some don't. Some use lard or shortening, and some use olive oil. What is fairly constant in these recipes is a quick cooking time of about a minute total on a dry, cast iron surface at medium heat. I read a few online recipes and decided to start experimenting. I knew I wanted the tortillas to be big because of a vegan burrito project I was working on, so I divided the dough into fewer pieces than you'll typically see. Depending on how you roll, these turn out to be in the 10-12 inch range and you'll get 6 of them. I want to experiment in the future with different amounts of wholewheat flour, but I'm satisfied with these for now.

Measure out the flour in a large mixing bowl.

Add canola oil 1 Tbl at a time, mixing it in with your fingers after each addition.

Add the refined coconut oil and gently mix it in as well.

You should see a fairly uniform distribution of pebble-sized clumps.

Get the hot tap water into the measuring cup and dissolve the salt into it. Add about 2/3 of the water to the flour mixture.

Mix in the water with a fork to make larger clumps.

Switch to hand kneading in the bowl. Add more water as necessary a little at a time until a dough forms.

Turn the dough out onto a lightly floured kneading board.

Knead for 5-10 minutes until the dough becomes smooth and uniform.

Divide the dough into 6 pieces (I used a scale for this because I'm really bad at eyeballing it. Each piece was 115-120 g, but your dough may be lighter or heavier depending on how much water it contains.) Knead each little dough ball into a round shape.

Place the dough balls on a plate and cover with plastic wrap. Let the dough rest for 45-60 minutes. Toward the end of the rest period heat up an (ideally) cast iron skillet, tawa, comal, griddle etc. over medium heat. (Just make sure the surface is big enough for the diameter of the tortillas that you'll be making.)

Roll the dough out as flat and round as possible. I usually get it to a little over 10 inches. They're not always perfectly round. I need more practice.

Cook the tortilla on the hot surface (without additional oil) for about 30 seconds on each side.

You should see bubbles forming quickly after you flip the tortilla.

Stack the cooked tortillas on a second plate under a tea towel (so that the moisture doesn't escape). They will initially be stiff, but after sharing this moist environment with their fellow tortillas, they will moisten up and become flexible.