Next in ToC: Vegan Apple Banana Bread will Fill your Kitchen with the Sweet Aroma of Home

Save Room for Vegan Apple Crisp 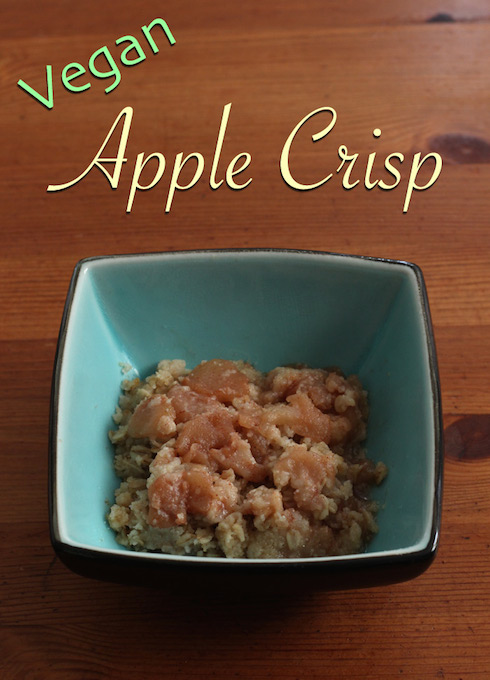 Of course, apple crisp is a classic. Tangy apples on the bottom are set off against a sweet, crumbly oatmeal topping. Butter is usually a big part of that topping. As an experiment, I wanted to see whether I could use a combination of plant-based oils to produce the crumbly-but-substantial texture that gave this dessert its name. Even if I couldn't, I had a pretty good idea that the butter-free recipe would still result in a rich, satisfying dessert.

I chose equal amounts of canola oil and refined coconut oil. (That's refined as opposed to virgin coconut oil, which has a very strong coconut flavour, not always what I'm looking for in an oil.) All in all, I'd say the veganizing was a success. I'll be honest, I was disappointed to find that it was a little gritty when it first came out of the oven, but it firmed up as it cooled. I enjoyed it for several days, mostly direct from the fridge. (I found it a little more enjoyable served cold.) I hope you like it too.

Put the orange and lemon juices in the bottom of a mixing bowl.

Core, peel and slice the apples into bite-sized pieces. The process will be a fair bit smoother with an apple coring tool. It does exactly what it says. If your aim is good, you won't have to do very much to finish cleaning out any remaining bits of core with your paring knife after peeling the apple and slicing it open.

As you finish each apple, add the pieces to the bowl with the juices in the bottom and mix with a wooden spoon. The acid will help slow down the browning of the apples.

Add the 1/4 cup sugar and the cinnamon to the apple mixture and mix well.

Mix the dry topping ingredients in a large bowl

Drizzle the canola oil a little bit at a time and mix a little in between additions so that clumps start to form.

Do the same with the melted coconut oil.

Put the apple mixture in the bottom of the baking dish

Spread the topping on top of the apple mixture.

Bake at 350 °F for about 45 minutes, until the topping is golden brown. Let cool before sampling—the texture of the topping improves as its temperature drops.