Next in ToC: Spinach Fatayer Panzerotti

The Flavour Explosion that is Tapenade 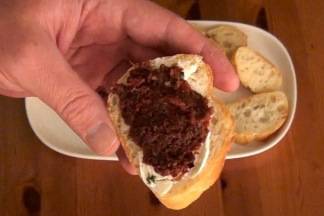 I think of tapenade in somewhat the same way that I think about pesto. Both are fairly simple to make—you just combine a bunch of interesting ingredients in a food processor and let them mingle with eachother until they achieve their equilibrium. Another similarity is the richness of the the flavours, flavours so rich in fact that you might be a little put off by their intensity and unfamiliarity the first time you taste them. Foods that start out being too intense to love often become my favourites with repeated tasting. The first time I had a falafel or a heavily spiced curry dish, I didn't understand the appeal. By the third time though, I definitely understood.

So it is with tapenade. Wikipedia tells us that tapenade originally comes from the south of France, where it typically consists of a fairly intense puree of black olives and capers with other similarly intense ingredients. The variations in those accompaniments are many—it's one of those dishes that lends itself to experimentation. To start experimenting, you really only need something a little bit bland to serve as the base for your tapenade's intensity—fresh baguette in quarter inch slices or water crackers, for example. I really (and I mean really, probably a little too much to be honest) enjoy spreading cream cheese on the baguette slice first and topping that with tapenade. The cream cheese contrasts with the tapenade for an extremely satisfying burst of flavour. I cannot think of a better accompaniment for a couple of drinks on a late Saturday afternoon than a small tray of these appetizers.

Making tapenade is extremely simple, but it's a good idea to do it the day before you need it so that the various ingredients have a chance to mellow in eachother's company in the fridge overnight. If you taste it right after you finish making it, you might find it too salty, garlicky or lemony, but I think you'll find it much more delicious the next day.

Start with about a half-teaspoon of lemon zest. A little lemon zesting tool like the one shown here makes getting the zest much easier. It may be necessary to chop up the strands post-zesting if they're too long.

Pit about a cup of kalamata olives, jumbo if you can find them, leaving out the mushy ones.

Coarsely chop about a cup of sundried tomatoes, preferably ones that have been stored in olive oil.

Get about 1 Tbl of lemon juice from the lemon that you zested in the first step.

Pick off the leaves of approximately 1/4 cup of cilantro (or basil, or mint—whatever you think will taste good). Wash the leaves well and dry them.

Combine all of the ingredients so far in a food processor and add some fresh ground pepper.

Start to process the mixture until it starts coming together in a thick paste where the individual ingredients still retain some of their individuality.

Rinse and dry 2 tsp of capers. (This spread is salty enough without the brine from the capers.) Add the capers to the food processor and process again until the capers are in small chunks.

And that's your tapenade. Like I said earlier, the tapenade will respond enthusiastically to an overnight trip to the fridge.

Just before serving, slice some fresh baguette in quarter-inch slices.

If you start with a base of spreadable cream cheese and spread the tapenade on top of that, I think you will experience the flavour explosion that I was talking about at the beginning. The other good thing about serving it with cream cheese is that it serves as a less intense alternative for anyone with an aversion to any of the ingredients. (I'm amazed at how intensely the cilantro haters hate cilantro. I love it and I think it works really well here with the salty olives.)