Previous in ToC: Aloo Gobi will Make your Mouth Happy

Next in ToC: Ribsticking Vegan Baked Beans for Cold Nights

Szechuan Eggplant from Scratch (No Sauce from a Jar) 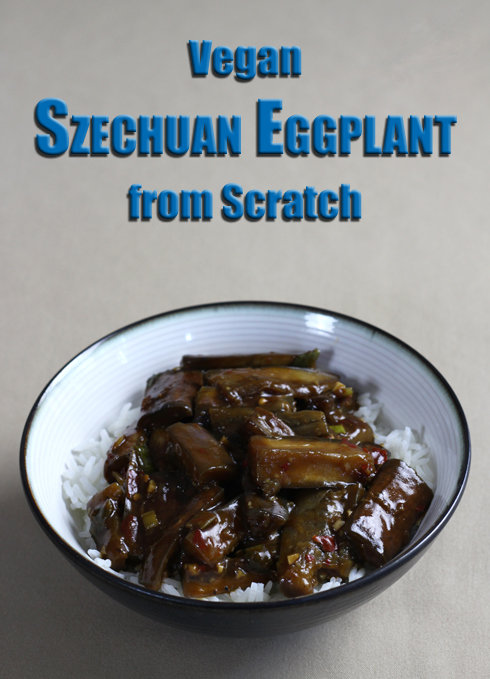 Like I've said before, one of the perks of living in a big city like Toronto is the exposure to all different kinds of food. If it wasn't for Asian food in particular, I would have left this city a long time ago. I've been in love with szechuan eggplant since the first time I had it at a restaurant. I'm not going to lie, this is a spicy one, and it's not going to be everybody's cup of tea. But the aromas and flavours of the szechuan spices go much deeper than just "hot". Of course I've tried to duplicate it at home using szechuan sauce from a jar, but of course it never even came close. For this recipe, I decided to try to use the internet to unlock the secret and make a passable szechuan eggplant from scratch.

The price of authenticity is a bit of a scavenger hunt for ingredients. I still find Asian grocery stores a little enigmatic and the aisle of sauces particularly so. For this challenge, the internet and my smartphone came to the rescue. It makes it a lot easier to get past communication barriers in Chinatown (like my tortured pronunciation) if I can show someone the Chinese characters corresponding to what I'm looking for on my smartphone. I've literally wasted half an hour wandering up and down the sauce aisle, then found somebody, shown them the characters on my screen, had them reach right where I was looking moments before, and hand me the exact ingredient I was looking for.

Of course, once I've seen an ingredient once I will never have trouble finding it again. The learning curve is only daunting at the beginning.

Having said that, you might be wondering about substitutions. I've definitely seen them in other recipes. For example, most szechuan eggplant recipes I looked at online called for black vinegar, an ingredient I'd never heard of before. Some of them suggested substituting apple cider vinegar, which was tempting because it was sitting right on my shelf. I decided to at least try to find black vinegar in the Asian grocery store (which turned out to be relatively easy) before swapping it with something else. Boy am I glad I got the real thing. Black vinegar tastes absolutely nothing like apple cider vinegar. It's way less acidic, more earthy, and not fruity at all. There's a nuance to it as well—I don't really have a good adjective to describe it—but I have to believe that this would be a less interesting dish with some other kind of vinegar.

So if you want to give this recipe a whirl, my suggestion is to treat your trip to the Asian grocery store like the learning experience that it is, be patient, and bring your smartphone preloaded with the ingredients you're after. If you do, I believe you'll enjoy making your kitchen produce smells and flavours that it has never produced before.

Here are the four special ingredients that I picked up at the Asian grocery store for this recipe along with the Chinese characters that (I believe) best represent them and photos:

I'm told that szechuan peppercorns were once hard to find in the west, but these were pretty easy. They are also known as Prickly Ash Peppers as you can see in the photo above. A Chinese-reading friend was good enough to look at the package for me and he tried to explain how the Chinese characters that you see on the web for Szechuan Pepper (花椒 or hua jiao) are drawn on this package. The right two characters in the group of three on the label at the bottom of the package are apparently the ones. I can't see it, but my friend likens it to trying to read English in one of those fancy calligraphy fonts. Anyway, if worst comes to worst, show the clerk the 花椒 characters and you should be good to go.

Wikipedia says that this broad bean paste or doubanjiang is a very important ingredient for szechuan cooking, and I did see it mentioned in most of the szechuan eggplant recipes that I looked at. It's important to find one made with soybeans and broad beans, as opposed to black beans. (The reason this one is black in colour is because it contains black vinegar.)

I also found a spicy version of this paste, pictured here:

This brings us to an important moment in my learning curve about Chinese cooking. There is a whole lot of variability in the ingredients, which increases the risk for the uninitiated (i.e., me). The take-home message was the need for trial and error. You might not like what the recipe produces the first couple of times. Decide what you didn't like and use less of it the next time. After a few repetitions, you'll make the recipe your own. Don't be afraid to try different things even after you feel the recipe is working well for you—if an experiment leads to an improvement in flavour, modify the recipe and give yourself a pat on the back. This spicy doubanjiang (also known as "la doubanjiang" or 辣豆瓣醬) is an example of exactly that kind of improvement. I had made the dish about a half dozen times with the regular doubanjiang and it was perfectly fine, but I had been casually keeping an eye out for the spicy version because I wanted to try it. I finally found it, brought it home, whipped up a batch of eggplant, and enjoyed it immensely. Not that the old version was bad, I just enjoyed the taste of the new version that much more. Just personal opinion, but that's what guides me to make improvements in my favourite recipes over time. When a newer version of the recipe works better, it's very satisfying.

This is another ingredient where my eyes are having trouble spotting the characters on the label, but the English is clear. Chinkiang vinegar is a thick black vinegar made from glutinous rice. Its flavour is only slightly acidic and it has some very subtle, earthy undertones that make it like nothing I've ever tasted before. Sometimes the doubanjiang is sold with black vinegar mixed in, in which case you'll want to reduce the amount that you're adding.

Finally, I picked up some pickled red hot chili peppers, which were not difficult to spot. The Chinese characters above translate literally as "soak red hot pepper." These are about an inch long and I'd say they're a solid medium on the spice scale. You could substitute your favourite pickled pepper here if the Chinese version is hard to find, I think. Similar to the black vinegar, sometimes the doubanjiang has the chili peppers mixed in, reducing or eliminating the need for extra peppers.

Rinse the eggplants, trim the ends and slice them lengthwise into quarters.

If the bottom ends of the eggplants are thick, separate the thick portion from the upper thin portion and cut the thick quarters in half again to make nice thin eighths. The texture of the finished dish will be softer if the pieces are thinner.

Then chop the pieces into 2-3" sections.

Place the eggplant slices into a large bowl of water with 2 tsp of salt added. Let them rest there while you prepare the other ingredients. (You'll drain them and dry them with paper towel (to avoid a nasty splattering reaction with the hot oil) just before adding them to the wok.)

Place the whole peppercorns in a mortar and pestle and grind well.

Using a fine-mesh strainer, extract the powder from the mortar and pestle. Discard the large pieces left in the strainer.

Peel the ginger with a knife and then use a small hand grater over the bowl of szechuan pepper powder to grate the ginger, being careful to trap the juice as well.

Mince the garlic with a little salt and add it to the bowl.

Mix everything together into a rough paste.

Mix the sauce ingredients in a bowl.

Slice up the pickled peppers (if using) and leave them on the cutting board with the whites of the onions, ready to be added to the wok.

Heat the wok on medium-high heat, add 2 Tbl of oil and wait for it to heat up. Drain the eggplant, dry with paper towels, and carefully add it to the wok.

Stir fry the eggplant for around 3 minutes, to the point where it's softened, but still holding its shape.

Remove the eggplant to a plate.

Add the other 1 Tbl of oil to the wok. When hot, add the pepper-ginger-garlic mixture as well as the whites of the green onions and chopped chili peppers (if using).

Stir fry until the oil becomes fragrant (not long).

Add the doubanjiang and mix well until thoroughly combined and the oil begins to separate.

Add the eggplant back to the wok and mix.

Stir the sauce thoroughly in the bowl (the cornstarch settles) and add it to the wok.

Stir constantly until the sauce begins to boil and thicken.

Then, reduce heat to medium-low, cover and cook around 10 minutes more, mixing occasionally, until the eggplant is cooked through.

Mix in the green part of the green onions at the very end.

Serve hot over rice or alongside noodles.