Next in ToC: Get your Quinoa and Beans with a Side of Flavour 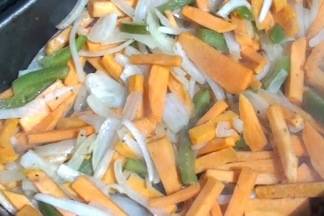 Sweet potato is one of the foods that the diet gurus are always trying to get you to eat. You'll hear terms like anti-oxidant, beta carotene and complex carbohydrate. I don't dislike them, but I can't say I've ever come home from work with a sweet potato craving. Since I started making a serious effort to improve my diet, I've been looking for ways to work more of these "good" carbs into my regular menu. Baked sweet potato doesn't really grab me, so I was thinking that grilling might be a better choice. Straight grilling on the BBQ with a little olive oil and fresh black pepper makes a tasty side dish, but it still left me wanting something more. That "something" came by way of a phone conversation with a good friend of mine who's also recently taken quite a serious interest in nutrition. He suggested julienned sweet potatoes combined with onions and green peppers, mixed with the usual olive oil and pepper, and grilled in a shallow pan. I was a little skeptical about the flavour, but I gave it a try, and I have to say he was right on the money. It's delicious and it goes with pretty much anything. Two thumbs way up. That recipe can be found below.

But first, a quick look at the more traditional grilling approach. I grill them in thinnish slices (less than 1/4 inch) on a medium hot grill, after mixing them with a couple of tablespoons of olive oil and fresh black pepper in a large mixing bowl.

Knowing when they're done is a bit of a challenge. They need to be soft through the center, but you have to get them off the grill before they start disintegrating.

A good rule of thumb seems to be about 10 minutes per side, but it's going to take a few attempts to get a feel for it. You can brush them with more olive oil while cooking if desired. Other people suggest simmering them in (previously boiling) water for 10 minutes or so before grilling to help make sure they're done through the middle. I've also seen different basting ideas, usually involving butter, brown sugar, cinnamon, nutmeg and other sweet stuff. Experiments for another day.

I enjoyed these as a side dish for a few meals.

As good as they are by themselves, sweet potatoes don't really shine until combined with onions and peppers. First, I cut the potatoes in half and carefully made 1/8 inch slices.

Then, julienned matchsticks about 3" long.

After doing the same with a large onion and green pepper, I combined everything in a large mixing bowl with 3 Tbl of olive oil and lots of freshly ground black pepper. Then I spread it all out in a shallow baking pan.

I grilled them on a medium high heat, with the lid closed, mixing every five minutes until potatoes were soft. Depending on the temperature, this could take up to 30 minutes.