Next in ToC: Vegan Macaroni and (No) Cheese

Stir-Fried Veggies can be the Whole Meal 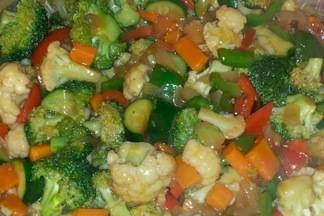 In his interesting book, Eat to Live, Joel Fuhrman challenges the typical notion of what constitutes a meal. His plan emphasizes nutrient-rich foods like whole fruits and vegetables over the high-calorie, low-nutrient staples of the typical western diet. I don't consider myself a convert yet, but there's lots to think about in this little book, and I find myself flipping through its recipes when I'm feeling a little run down. I have to admit that on the occasions when I follow through and make one of these super high-nutrient meals, there's a little extra spring in my step the next day, and physically demanding activities like jogging somehow feel lighter and easier. It may be all in my head, but I'm experiencing enough benefit to want to keep doing it.

One of Fuhrman's contrarian ideas is that you can have a full meal consisting only of a big plate of vegetables. I admit that on the surface, that doesn't sound incredibly appetizing. I can only suggest that you give it a try and see if you enjoy it. The first time I tried it, I was surprised by how satisfying it was. The secret is to go big. Make your plate overflow with all of the different veggies that tickle your fancy. It helps if they have been cooked to a not-too-crisp, but not-at-all-soggy perfection. That takes a little practice.

I should say that the simple stir-fry that follows didn't come out of Fuhrman's book. I think he would probably object to the small amount of oil I use in the bottom of the wok to get things started. He probably wouldn't be a fan of the sodium in the tamari sauce either. I rationalize it this way: it's a whole lot better than what I would have been eating otherwise. The fact that I don't follow Fuhrman's approach to the letter doesn't take away from the book's value to my overall health. I get inspiration from his ideas that I wouldn't have had otherwise, and while he's slowly nudging me toward better choices, he's also making me realize that you don't have to give up flavour to eat well. For example, in the past I never would have even considered serving any kind of stir-fry without a base of steamed rice or (more likely) fried chow mein noodles. Now I don't miss those things at all. Try it, you'll like it.

As veggie stir-fries go, this is pretty standard fare. The only thing that's a little different is a thick corn-starch based sauce that I add at the end for some extra spice and flavour. But first, the vegetables. It's a good idea to get everything chopped and ready on a tray before you heat up the oil in the wok. That gives you the flexibility to add the vegetables exactly when you think they should be added for the right level of doneness, as opposed to when you're finished chopping them, which is usually too late.

It starts with half a chopped onion. (By the way, onion seems to slice better when you slice on an angle for some reason.)

Next, I mince garlic with a little bit of kosher salt. The salt brings out the garlic oil using a chemical process that I knew something about once but have completely forgotten. Sure tastes good though.

Next, some carrots from the garden. (Try to cook with produce that you grew in your backyard without getting just a little bit sentimental.)

Then, some (store bought) cauliflower, broccoli and zucchini.

And here's everything all chopped and ready to be added to the wok.

You want to add the vegetables to the wok in order of how long they take to cook. I heat the wok up just to medium heat, which is less than usual for a stir-fry, but I like the veggies to get a little steamed while they're frying, so I cook them a little longer. I add about 2 tsp of vegetable oil first, then the onions and garlic. After a few minutes, I add the carrots and cauliflower and put the lid on the wok to get the steaming underway. I check them every so often and give the whole mixture a stir.

When the cauliflower and carrots have started to soften a bit (after about five minutes), I add the zucchini. After another few minutes, the broccoli. When the the broccoli starts getting that rich green colour, I mix in the peppers, which don't take long to cook at all.

While the veggies are cooking, I start making the sauce. I learned how to make this type ofthick sauce from Michael Smith's interesting show, Chef at Home, in this case the episode where he makes kung pao chicken.

I start by pouring a cup of water into a small mason jar. Next, 2 Tbl of tamari sauce or soya sauce.

For heat, I use a chili sauce from the Koon Chun Hing Kee Soy and Sauce Factory in Hong Kong. It's about the consistency of ketchup and it's the closest thing I've been able to find to that delicious hot sauce that you get in a little dipping dish at the dim sum restaurant. I eat too much of it. Any chili sauce will do.

Then, just a quick splash of rice vinegar.

I put the lid on the jar and shake well to mix.

When the vegetables are almost ready, I take the lid off the wok, turn the heat up to high and add the sauce mixture. I stir constantly until the sauce thickens.

Pack the plate to overflowing, and serve while still steaming.