Previous in ToC: Vegan Macaroni and (No) Cheese

Next in ToC: The Veggie Burger that Ate Manhattan

Deluxe Vegan Macaroni and Fake Cheese with Spinach and Mushrooms 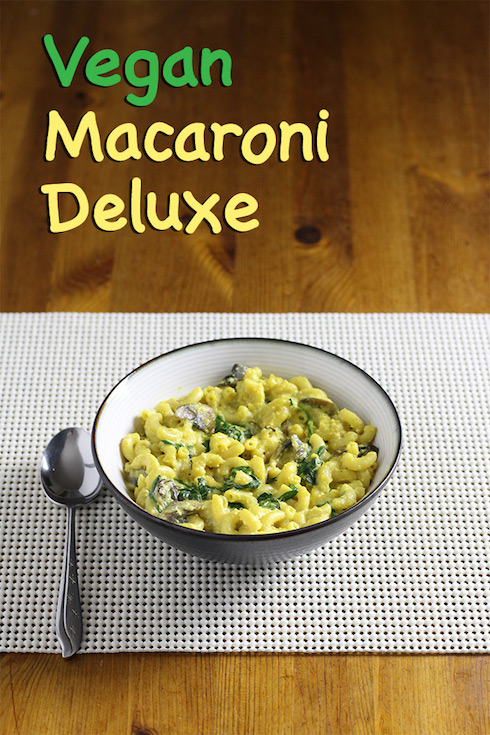 If you have been looking at vegan meal options for any length of time, you've no doubt seen the DIY vegan cheese alternatives involving nuts, nutritional yeast and some kind of milk substitute. I've tried a few and they can be quite delicious. Depending on the ingredients you choose, they can also be chock full of protein and other nutritional necessities that vegans typically care about. By itself, nutritional yeast is 50% protein by mass, and it has a healthy dose of various B vitamins. Some brands are fortified even further.

I've experimented with the vegan macaroni and fake cheese casserole, having made it about a dozen times over the past year. I enjoy it immensely, but I'm always looking for ways to introduce novelty to the recipe. One of my favourite variations involves adding different veggies. Baby spinach and sauteed mushrooms are particulary tasty because they get along so nicely with the lemon in the sauce. You'll find the full illustrated recipe for this variation below. What about you? Any other ideas for sprucing up this vegan classic? I'd love to hear about it in the comments.

Saute the mushrooms over medium heat with 1 Tbl olive oil until most moisture has evaporated, about 10 minutes.

Move the mushrooms to a plate, then wilt the spinach down in the same hot pan, mixing frequently, for about five minutes.

Once wilted, transfer the spinach to the same plate as the mushrooms. (We'll be adding them back at the very end.) Turn the heat down to medium low and let the skillet cool.

Put a large pot of generously salted water on to boil for the macaroni.

Peel the garlic. If you have a mortar and pestle, coarsely chop the garlic and then pound it to pulp with a little salt. (If you don't have one, just mince the garlic with the salt.)

Warm the remaining 2 Tbl of olive oil in the skillet on medium-low heat, add the smashed garlic and let cook a few minutes so the garlic mellows a bit and the flavour blends into the olive oil.

Grind the cashews into crumbs in a food processor.

Then, with the processor still running, slowly pour in the soy milk.

Process for half a minute or so.

Add the cashew/soy milk mixture to the skillet.

Add the nutritional yeast into the skillet and mix well.

By now, the pasta water should be boiling. Cook the pasta roughly according to the directions on the package but undercook it a bit because it will continue to cook once added to the sauce. (Also, I find it always takes elbow macaroni way less time to cook than what the package says.) When done, drain the macaroni in a collander.

And mix well into a creamy sauce.

And then add the spinach and mushrooms

For a little extra kick, top with Sriracha or similar hot sauce.