Next in ToC: Marinating and Grilling Portobello Mushrooms 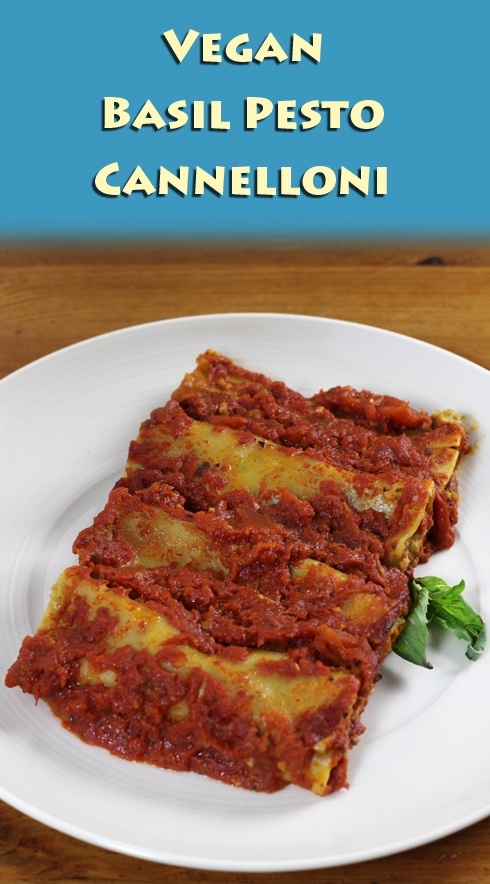 Like so many other European dishes that involve stuffing something into something, cannelloni seems ripe for a vegan reworking. (I've also got serious designs on cabbage rolls, stuffed peppers, ravioli and pierogies.) For the cannelloni, I wanted something substantial, but light enough that I could take it to work for lunch. It took a few attempts, but I think this combination of lentils, mushrooms and soy, bulked out with a little rice and seasoned with basil pesto flavours, hits the target. I had them at work all last week and I did not have one single urge to nap after lunch.

For my money, the homemade tomato sauce is the most important part of this recipe. Sauce from a jar is often excessively sweet and lacks the interesting texture of homemade. I decided to veganize an especially well written tomato sauce recipe from Serious Eats. I also cut it in half to avoid having way too much tomato sauce for my needs. I really recommend having a look at the original recipe because the writer goes into a lot of detail about the thinking behind his choices.

The recipe also calls for 1/4 cup of aquafaba, which is just a fancy name for the thickish liquid in a can of beans that we normally pour down the drain. Turns out AF has all kinds of uses in vegan cooking, and vegans usually use a ton of chickpeas so we have a ready supply. The simplest way to get aquafaba is to strain the liquid from a can of chickpeas. Harvesting the aquafaba from dried chickpeas is a little trickier than getting it from a can, but only a little. If you're interested in doing this yourself, here's a tutorial video from Mary's Test Kitchen. What I do is similar, but I don't bother reducing the AF down at the end because I find that it's already very thick after hanging out with the cooked chickpeas for a few hours.

I make a huge batch of hummus pretty much every week, so I've got a ton of aquafaba. (The only thing I do differently if I'm planning on saving the aquafaba is I don't add 1/2 tsp salt when I'm cooking the chickpeas, but I add a little more salt when I'm making the hummus itself.) Following the recommendations of some AF geniuses, I pour my AF into ice cube trays and once frozen, transfer the cubes to a large freezer bag.

If the recipe calls for 1/4 cup of aquafaba, I thaw 4 cubes in the fridge, which is a little more than I need. Or you could just strain the liquid from a can of chickpeas.

cheesecloth for wrapping onion and basil

1/4 cup aquafaba (liquid from a can of chickpeas)

Preheat oven to 300 degF if you're going to make the sauce in the oven (it really turns out nice that way). If it's summer and you'd prefer not to have the oven on for a couple of hours, you can also make it in a slowcooker just fine. Either way, the house ends up smelling fantastic.

Pour tomatoes into a large mixing bowl and mix by hand. Break up the large pieces by squeezing. The largest chunks shouldn't be any bigger than about 1/2 inch.

Reserve 1 cup of the tomato mixture in the fridge to add back in at the end.

Wrap onion and basil in cheesecloth and tie off with string. Set aside.

If you're going to make the sauce in the oven, a deep dutch-oven-type-pan with a lid comes in very handy because you can just transfer it from the stove to the oven. Otherwise, a deep skillet and an ovensafe casserole dish with a lid will do just fine. If you're using a slowcooker to make the sauce, a skillet is the way to go.

Add mixed tomatoes, the carrot chunks and the cheesecloth containing the onion and basil.

Cook until warmed through.

Bake about 2 hours, stirring every hour or so, until sauce is reduced by about half and a nice deep red colour. (It's important not to cook the sauce for too long because the flavour becomes overpowering, and remember that you'll be putting it back into the oven for an hour with the cannelloni.)

Discard cheesecloth pouch and carrots. (Slice up the carrots and eat them if you want; they're delicious.)

Put water, rice, lentils and salt in a medium pot with a lid. Bring to a boil, then reduce to simmer, cover and let cook 15 minutes. Remove heat and let cool.

Clean, trim and coarsely grind the mushrooms in a food processor. Saute over medium heat in 1 Tbl olive oil and 1/4 tsp salt about 10 minutes until soft. Remove heat and let cool.

Put 1/2 cup of water on to boil in a small pot with a lid. When boiling, turn off heat, mix in TVP, cover, place on a cool element, and let sit 10 minutes, stirring occasionally.

Let everything cool until it can be handled comfortably—you're going to be mixing with your fingers.

Place rice/lentil mixture in food processor along with 3 cloves of garlic, lightly minced with some salt, and the basil leaves. Process into a homogeneous mixture slowly, stopping frequently to move things around with a wooden spoon. Do this in small bursts because it's quite sticky. Process until there are no large pieces of basil left.

Place lentil mixture in a large bowl along with cooled mushrooms and TVP. Add the remaining filling ingredients.

Mix by hand until uniform.

Gently stuff each cannelloni shell with filling. I find it's fastest to do this with my fingers because a spoon can't get past the opening to help the filling along.

Place each cannelloni in the baking pan as you finish it. This batch of filling should make about 18 of them.

Coat the cannelloni evenly in the remaining sauce.

Cover the pan with aluminum foil and bake for about an hour, until the shells are tender.

I find four of these to be a very satisfying lunch. They transport and reheat very nicely at work.