Next in ToC: Grilled Tofu in Garlic Lemon Sauce 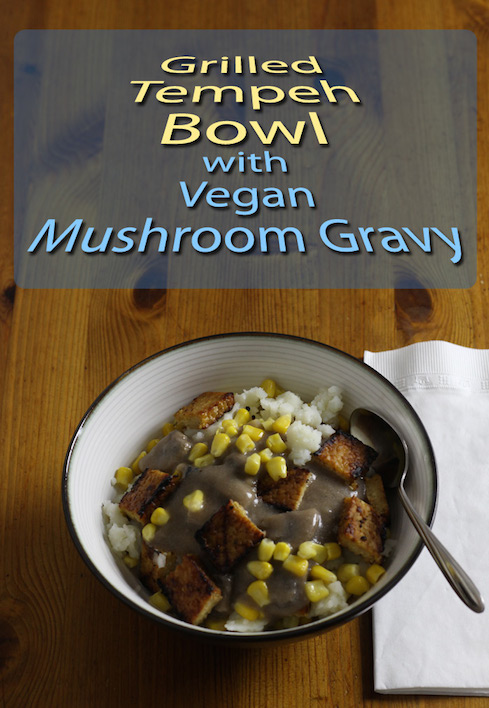 In many North American meat-eating households, family celebrations almost always feature turkey, mashed potatoes, gravy and veggies. A lot of us grew up participating in these celebrations and the memories are deep-seated. KFC taps into these memories quite effectively by marketing a bowl consisting of mashed potatoes, corn, chicken and gravy. What if we could make a vegan version of that bowl with a good source of protein and a vegan gravy that actually tastes good?

It's actually not all that tough. With mushrooms flavouring the gravy, the potatoes and corn do most of hard work, giving this bowl its soul-satisfying yum factor, and triggering those childhood family meal memories. The tempeh that I chose for protein actually has a pretty easy job.

If you're not familiar with tempeh, it's a form of fermented soybeans, pressed into a dense cake. The flavour is a mixture of nutty and earthy, and it responds very well to marinades and heat.

Tempeh is readily available in health-food stores and larger grocery stores here. The package trumpets an impressive 16 g of protein in an 80 g serving. 20% protein is a pretty high number for vegan food, and it puts tempeh near the top of the list in grams of protein per serving. I usually work with it in 1/4" slices so that there's lots of surface area in contact with the marinade, but it's still thick enough to hold together during cooking. It can be grilled, roasted or fried, but because we're getting an early taste of summer this year, I opted for grilling.

Vegan mushroom gravy is not all that difficult either, but because everything else in this recipe is so easy, it's the most complicated part. The secret to thick vegan gravy is mixing some kind of fat with a thickener like flour. In this case, the fat is in the form of refined coconut oil. I was careful to use the refined variety for this recipe, because "virgin" coconut oil has a very strong coconut flavour, not really what we're looking for in a gravy. If you're interested, here's an interesting discussion of how the various kinds of coconut oil are made and how they differ from eachother.

Mix all marinade ingredients together and then pour in a shallow container, preferably one with a lid.

Add the tempeh to the marinade dish and mix to ensure thorough coating. Place in the fridge for anywhere from an hour to overnight.

Peel, quarter and put the potatoes on to boil in salted water. When the water starts boiling, reduce heat to medium and partially cover. Cook for 20-25 minutes until potatoes are soft.

In the meantime, melt the coconut oil in a medium saucepan over medium heat.

When the oil is melted and hot, add the mushrooms and saute stirring often for 5-7 minutes until the mushrooms lose their moisture and start to brown.

While the mushrooms are sauteeing, measure out 1/4 cup of flour. Put the flour aside. In a measuring cup, mix together the stock, wine and tamari (or soy) sauce and place this mixture near the pot for quick access.

Add the flour to the pot.

Mix constantly for 2 minutes, trying to minimize the amount of flour sticking to the bottom of the pot.

After 2 minutes, add a small amount of the stock mixture and mix it well so there are no lumps.

Continue adding and mixing until all of the liquid has been incorporated.

Bring the pot to a boil, stirring constantly.

After the gravy boils, reduce heat to medium low and continue stirring for 5 minutes, until the gravy thickens.

Leave the gravy on a low simmer.

Grill the tempeh on a medium BBQ for about 5 minutes per side. A little charring is ok, but be careful not to let it burn.

Heat the corn according to package directions.

When the potatoes are ready, drain them and transfer to a large bowl. Add margarine and mash and/or mix the potatoes with an electric mixer if possible.

Cut the tempeh into bitesized pieces.

Assemble the bowls with potatoes, corn, gravy and tempeh.